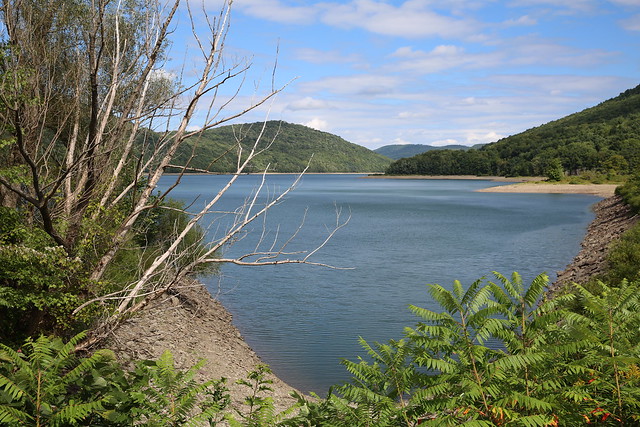 Located at the western edge of Delaware County, southwest of the Village of Walton and about 120 miles northwest of New York City, Cannonsville Reservoir is formed by damming the West Branch of the Delaware River, which continues south and becomes part of the lower Delaware River, the border between New York and Pennsylvania. It was placed into service in 1964 and holds 95.7 billion gallons at full capacity.

Cannonsville Reservoir is one of four reservoirs in the City’s Delaware system and the newest in New York City’s water supply. Water drawn from Cannonsville Reservoir enters the West Delaware Tunnel and travels 44 miles to the upper end of Rondout Reservoir. From there, it’s carried in the 85 mile long Delaware Aqueduct under the Hudson River and ordinarily makes its way to the West Branch Reservoir and Kensico Reservoir for further settling. Leaving Kensico Reservoir, where it also mixes with Catskill system water, it passes through two aqueducts to Hillview Reservoir in Yonkers, where it enters New York City’s water supply distribution system.

Water not taken for the City’s supply is released from Cannonsville Dam at the reservoir’s west end and flows into the lower West Branch of the Delaware River. Under a 1954 U.S. Supreme Court ruling, New York City can take up to 800 million gallons a day from the Delaware River, provided it releases enough water to insure adequate flow in the lower Delaware for New Jersey and other downstream users. This process is overseen by the Delaware River Master. The City also, in conjunction with the New York State Department of Environmental Conservation (DEC), releases water from Cannonsville to help maintain the fisheries of the lower West Branch River.