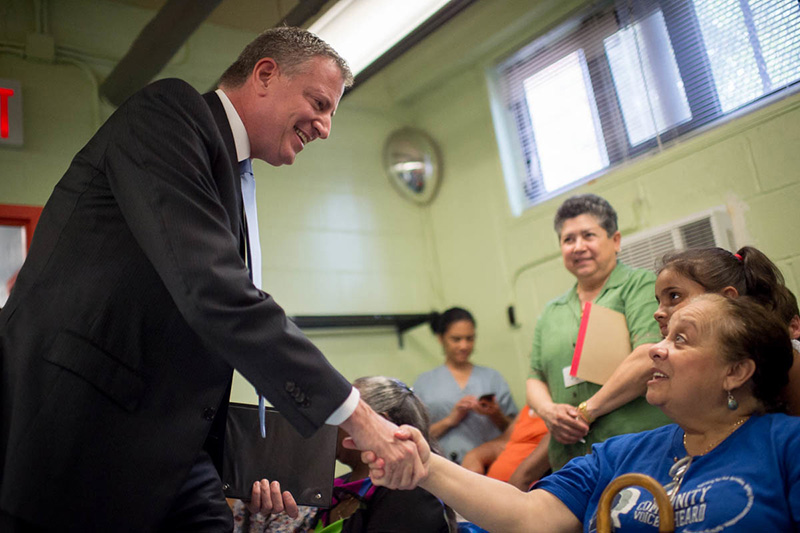 Since the beginning of 2014, even as crime has dropped citywide, shootings in public housing developments have gone up by 31 percent. The de Blasio administration will focus its crime-reduction efforts on the 15 NYCHA developments that account for nearly 20 percent of all violent crime in public housing: Boulevard; Brownsville, Bushwick; Butler; Castle Hill; Ingersoll; Patterson; Polo Grounds; Queensbridge; Red Hook; St. Nicholas; Stapleton; Tompkins; Van Dyke; and Wagner.

The initiative will partner with community organizations and residents of the housing developments with high rates of violence to identify and respond to the most pressing problems plaguing the community, provide a forum where residents and City agencies can monitor information about the conditions that contribute to crime, and create a place where residents have a respected voice and target appropriate interventions to individuals who need them the most.

The $210.5 million investment consists of: $122 million of City funds to relieve NYCHA of other obligations, so that money can be used for repairs and maintenance; $50 million for physical improvements to enhance security; $1.5 million for exterior lighting at the 15 developments; $21.4 million for the civilianization of 200 police officers; and $15.6 million to expand key programs to help build stronger individuals, families and communities.

The NYPD will re-allocate resources and equipment to deploy more than 700 additional officers to the precincts and NYCHA developments with the highest need, increasing the NYPD’s housing bureau by about a third. This includes the civilianization of 200 officers announced by Mayor de Blasio and Speaker Mark-Viverito on June 19, 2014, and NYPD coverage of NYCHA community center during extended summer hours, which carries with it a $21.4 million budget impact.

In addition to this increased presence, a vital component in the battle against crime, officers will conduct wellness visits – visits to individuals involved in recent accidents. Officers will also make more visits to victims to domestic crimes to ensure their safety, offer assistance, and help to facilitate access to services as needed.

Attention to physical environment can play a major role in crime reduction by making developments inhospitable to crime, which is why this strategy places a major emphasis on the physical environment. NYPD, NYCHA and City Hall officials have identified enhanced security lighting as a critical need. The administration will invest $1.5 million mobilize 150 light towers from NYPD, NYCHA and the Department of Parks and Recreation next week for exterior perimeter security lighting in these 15 targeted developments to better light pathways, public areas and doorways while more permanent security lighting solutions are developed.

NYCHA has already moved 10.9 miles of sidewalk shed in 2014, and will have an additional 10.2 miles removed by next spring as the underlying construction work on building facades is completed. In addition to those ongoing efforts, the administration, City Council Speaker and other City Council members are investing $50 million for physical improvements to enhance security, including security lights, camera installation, and the installation of layered access and new doors where they are needed most. This fall, NYCHA officials will begin their process of engaging with residents of the 15 highest-need developments to identify the necessary physical enhancements for each development.

The City will also begin neighborhoods surveys with residents to identify existing problems and opportunities to improve overall neighborhood design. Beginning July 14, 30 Summer Youth Employment Program participants from the 15 targeted developments will begin working with the Mayor’s Office of Operations’ Street Conditions Operations Unit (SCOUT) teams. These teams will document physical problems, such as broken swings in playgrounds and broken lights, in distressed housing developments to produce a roadmap for City agencies to address these issues.

The administration began investing in physical improvements to NYCHA developments with its preliminary budget in February 2014, and has to date, provided NYCHA with $122 million of City funds to relieve the authority from prior financial obligations, freeing up that money to be used on repairs and maintenance.

The City cannot reduce crime alone, which is why the residents who see and live these problems each day will have a voice and a seat at the table. When individuals are mobilized and empowered, they are more likely to come together as a community to work on common problems to create a thriving community.

Led by the Mayor’s Office of Criminal Justice, the City will create a coordinating body of City agencies and neighborhood residents to identify the most pressing concerns as well as the appropriate responses. As part of this process, the City will develop a dashboard to track key data and indicators to monitor progress in achieving the goals. Among other things, this neighborhood-based process will use City data and analytics to identify individuals most at risk of becoming offenders and matching positive interventions to help prevent criminal behavior.

The City will also begin to solicit input from residents on a more regular basis, through the launch of community feedback surveys targeted at the 15 developments to assist in establishing goals tailored to each community and gathering community feedback on progress.