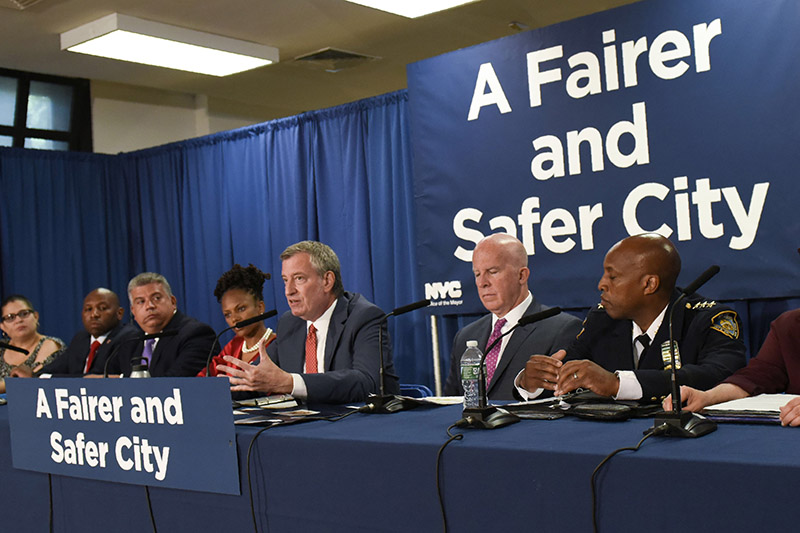 By September 1st, the majority of New Yorkers found smoking in public to receive criminal summonses which will help reduce marijuana arrests by about 10,000 per year

NEW YORK—Mayor Bill de Blasio and Police Commissioner James P. O'Neill today announced a new policy to reduce unnecessary marijuana arrests. By September 1st, 2018, the majority of New Yorkers found smoking marijuana in public will face criminal summonses instead of arrest– continuing a significant shift in overall marijuana enforcement to better balance fairness with public safety and quality of life concerns. The change is the result of the final report and recommendations produced by the 30-Day Working Group on Marijuana Enforcement that convened in May, and according to NYPD projections, will likely reduce overall marijuana arrests in New York City by about 10,000 per year based on 2017 arrest records and patterns.

New Yorkers will still be subject to arrest if they are on probation or parole, if they have existing criminal warrants, don't have identification, have a recent documented history of violence, or their smoking poses an immediate public safety risk—such as while driving a car. The new policy builds on previous efforts by Mayor de Blasio and the NYPD to strike a balance on marijuana enforcement between fairness and safety. In 2017, the NYPD made 64 percent fewer arrests for possession from 2010, going from 53,000 to 19,000 arrests. Of these arrests, 50,000 were for smoking in public in 2010 compared to less than 17,000 in 2017.

"Nobody's destiny should hinge on a minor non-violent offense," said Mayor Bill de Blasio. "Neighborhood policing has helped to bring officers and community together, but we still have more work to do to right the wrongs in the criminal justice system. This new policy will help reduce unnecessary arrests, while making our City fairer and safer."

"We know that it is not productive to arrest people who have no prior criminal history," said Police Commissioner James O'Neill. "In fact, it hampers our efforts to build trust and strengthen relationships with the people we serve, and it does nothing to further the NYPD's mission of ridding our streets of those responsible for violence and disorder. Issuing summonses for marijuana offenses that do not directly affect public safety will allow our officers to do their jobs effectively and safely, and in a way that always promotes public safety and quality of life for all New Yorkers."

Elizabeth Glazer, Director of the Mayor's Office of Criminal Justice, said. "Today is a significant step forward in our work to make New York the fairest city in the country. We have record low crime rates at the same time we have the lowest incarceration rate of any large city in the country. And while it is extremely rare for people to go to jail for possessing marijuana, any touch from the criminal justice system should be proportionate to the activity involved and the shared goal of public safety. This new policy will lighten the touch and continue our work with New Yorkers to keep this the safest and fairest city."

The policy change was the product of the 30-Day Marijuana Working Group, initiated by Mayor de Blasio and conducted by the NYPD. The overarching objectives of the Working Group were to identify why differences in arrest rates exist; ensure that NYPD enforcement practices are consistent with the values of trust and community engagement at the foundation of Neighborhood Policing; determine ways to reduce arrests for marijuana offenses if and when those arrests do not impact public safety or reduce quality of life; and review overall marijuana enforcement to ensure it is implemented fairly while also promoting public safety and quality of life for all New Yorkers.

The Working Group found that most New Yorkers believe public smoking of marijuana was a public nuisance that should be curtailed; however, the consensus favored summonses in lieu of arrest if public safety and quality of life were unaffected. Currently, about 40 percent of people arrested for smoking marijuana had no prior arrest history. The change in policy has the potential to help thousands of younger New Yorkers with no record avoid the burden of an arrest.

In 2017, New York City received nearly 52,000 complaints from the public about the public smoking of marijuana, and addressing these complaints is important in order to protect the livability of City neighborhoods. Even in those states and jurisdictions where recreational use is now legal it remains illegal to smoke marijuana in public. While New York State law makes possession and smoking of small amounts of marijuana a misdemeanor, New York City police officers have discretion on how to exercise their enforcement powers.

Patrol Officers will receive guidance on how to implement this new policy thorough the summer. In the future, if unusually high arrest rates occur, the Police Department should conduct additional analysis to ensure that the enforcement levels are appropriate. Tracking arrest trends is an important aspect of these recommendations. The City will also issue quarterly reports on arrests and criminal summonses for marijuana possession by race and borough.

Beyond the enforcement policy announced today, New York City is also convening a separate Mayoral Task Force to determine the appropriate regulatory framework and identify the public safety, health and financial consequences should the State move forward with legalization. A report is expected by 2019. The work will be coordinated by the Mayor's Office of Criminal Justice and composition will include the Department of Health and Mental Hygiene, the NYPD, the Law Department, Department of Education and others.

Brooklyn District Attorney Eric Gonzalez said, "I applaud the Mayor and the Police Commissioner for adopting a policy to stop making arrests in the vast majority of marijuana cases, which is the approach I have been calling for and a step in the right direction. As we take this important step, we cannot forget those who have convictions on their record based on this conduct that we no longer prosecute, and so my Office will be vacating and sealing past marijuana convictions for thousands of people in Brooklyn. We must bring a sense of fairness to the past at the same time that we implement these new enforcement policies in the present. "

Bronx District Attorney Darcel D. Clark said, "I believe having NYPD officers issue criminal summonses during stops for public use and possession of marijuana will serve the purpose of addressing public safety and community concerns while sparing most Bronxites from undergoing arrest for these offenses. Since people of color in the Bronx are arrested for marijuana use and processed in the system in disproportionate numbers, they more greatly suffer the consequences of having a criminal record affecting employment, school and housing. I cannot turn a blind eye to this unfairness. As long as marijuana is prohibited by law, I will enforce the law because that is my duty as a District Attorney. But I am pleased to work with the Mayor and the police to make sure laws are enforced fairly and continue to refine our approach to marijuana offenses."

"The war on drugs has over-criminalized communities of color for generations. While I continue to advocate for the legalization of marijuana, I commend the Mayor for this important step in implementing fairer enforcement practices. We must take every step possible to change the broken status quo of outdated and shortsighted marijuana laws," said Public Advocate Letitia James.

"I commend the de Blasio Administration for this new city policy that helps to decriminalize marijuana possession and usage. Criminal justice reform actions like this - which pose no threat to public safety - have a direct impact on and are tremendously important to the greater effort to reduce our city and state jail populations and to help end mass incarceration in our country," said State Senator Brian A. Benjamin.

"Today marks the first step in rectifying decades of targeted enforcement of low-level marijuana offenses in communities of color," said Council Member Donovan Richards, Chair of the Committee on Public Safety. "I applaud the NYPD and de Blasio Administration for recognizing we must correct this injustice immediately and look forward to continuing to work with the Administration and stakeholders, to ensure real reforms are implemented to create a fairer and more just city."
"People of color across this city and country have had their lives irreversibly altered by our criminal justice system as a result of low level drug offenses for far too long. I am optimistic the more objective standards being announced today will help to address the disproportionate number of black and brown New Yorkers being arrested for smoking marijuana," said Council Member Robert Cornegy, Jr. "I also hope it will help us begin to turn the page on the long, dark history of warehousing people of color in jails and prisons."

"New York City is proving that we do not have to choose between public safety and advancing fairness in our justice system," said Council Member Stephen Levin. "It is important that law enforcement officials can respond to valid quality-of-life concerns without driving a wedge between police and residents. Let's allow the facts inform our criminal justice policy moving forward. It is clear that drug policy should be approached not as the sole responsibility of law enforcement, but primarily through the lens of public health. As the sponsor of the resolution calling on our state to fully legalize and tax cannabis, I'm proud this Administration is demonstrating a commitment to a more fair and just New York City."

"Studies have shown, time and time again, that Black and Brown men are disproportionally targeted for marijuana arrests, which burdens them with records that follow them for the rest of their lives. As a result of low level marijuana possession, they are deprived of education, housing, and employment opportunities, which affect not only their wellbeing and livelihood, but their families and communities, too," said Council Member Diana Ayala, Chair of the Committee on Mental Health, Disabilities and Addiction, Co-Chair of the Progressive Caucus. "Decriminalizing marijuana will not only lead to less arrests citywide, but it will also lead to more access for residents that live in the communities my colleagues and I represent. I thank Mayor de Blasio, Commissioner O'Neill, and the rest of the Administration for appropriately responding to this matter."

"With the marijuana policy changes announced today, we become a fairer city in the way we enforce the law," said Council Member Ydanis Rodriguez. "The lives of so many men of color have been impacted and thrown off course because of marijuana arrests keeping them from their families and being productive members of society. These policies are a good first step and we will continue to work together to improve police-community relations."

"The Fortune Society applauds the Mayor for taking this critical step that will help reduce the harm of the unnecessary incarceration of thousands of people predominately from communities of color. With this policy change, New York City moves closer to ending unnecessary and expensive detention and sentencing practices and fully understanding the complexities of substance use. The Fortune Society will continue to work with the Mayor and city officials to find other ways the city can further reduce our incarceration footprint and bring us closer to closing Rikers Island," said Khalil A. Cumberbatch, Associate Vice President of Policy at the David Rothenberg Center for Public Policy, The Fortune Society, Inc.

"Arrests for low-level offenses drive incarceration and entangle far too many New Yorkers in our broken criminal justice system. We're pleased to see the mayor's commitment to studying and addressing racial disparities when it comes to marijuana arrests," said Priya Raghavan, Counsel of the Brennan Center's Justice Program. "At the Brennan Center, we have advanced a number of proposals to keep people out of jail and not waste time and money on offenses that pose virtually no public safety risk. We hope the mayor will move forward to ensure the city's justice system is just for all New Yorkers."