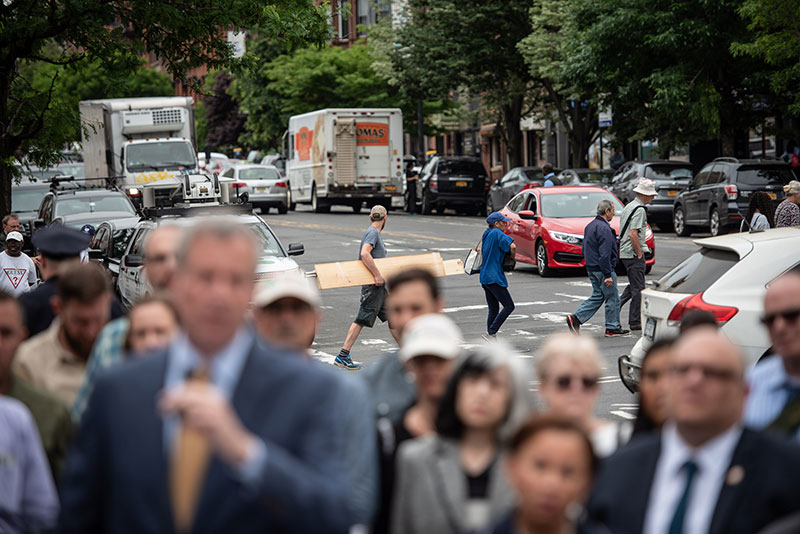 With life-saving school zone speed camera law in danger of expiring, Mayor urges expansion bill that will allow cameras along corridors like 9th Street, where they are currently banned

NEW YORK—With the City’s School Zone Speed Camera program set to expire in Albany next month, Mayor de Blasio today called on the State legislature to immediately reauthorize and expand the life-saving program. Standing at the site of a deadly crash in Park Slope that took the lives of two children and an unborn baby, the mayor unveiled a safer street design but urged Albany to do its part to protect kids in school zones. Under legislation now being considered, the number and coverage area of cameras would be expanded -- and allowed for the first time along corridors like 9th Street, where they are currently barred.

“We are doing our part with a redesign of 9th Street to reduce speeding and make it safer. Now we need Albany to its part. We need school zone speed camera legislation extended and expanded immediately to prevent future tragedies on our streets. Speed cameras save lives,” said Mayor de Blasio.

DOT’s proposed redesign, which includes expanded pedestrian access and protected bicycle lanes, will be released at a community workshop tonight. It will be presented to Community Board 6 in June, with installation slated this summer following community feedback.

“For the last few months, DOT’s planners, designers and engineers have been hard at work coming up with a safe and smart redesign of 9th Street,” said DOT Commissioner Polly Trottenberg. “Under the Mayor’s leadership, we will expand pedestrian space, and also add safer crossings and protected bicycle lanes. We look forward to getting feedback in June from the local community board, stakeholders and elected officials about our proposed plans. At the same time, we also look forward to making our closing argument in Albany next month for school-zone speed cameras, which have been such a critical component in our Vision Zero efforts that have helped New York City buck national trends -- with fatality declines for four straight years.”

Following the March crash along 9th Street that claimed the lives of two children and an unborn baby and seriously injured several others, the City is also pushing reforms in Albany that will escalate fines and suspend the vehicle registrations of repeat speeding and red-light running offenders, and require physicians to notify the DMV following medical events that could cause drivers to lose control of their vehicle.

Representative Nydia M. Velázquez said: “While nothing can take away the pain of Abigail and Jacob’s grieving parents, we can work to prevent future tragedies like these. Accordingly, this initiative will improve the safety of 9th Street for all members of our community. I commend the Mayor for spearheading this safety redesign, which includes expanded pedestrian space, safer crossings and protected bicycle lanes. I look forward to hearing the community’s feedback on this proposal. It is critical that as lawmakers we come together at all levels of government to champion safer streets and that includes the state legislature reauthorizing and expanding use of school-zone speed cameras. For my part, I will continue fighting for federal resources for transportation improvements and supporting innovative work at the local and state levels to make our city safer.”

“Our hearts were broken in March when Abigail Blumenstein and Joshua Lew were killed at the intersection of 9th Street and 5th Avenue,” said Council Member Brad Lander. “Mayor de Blasio and Commissioner Trottenberg committed to bring forward a plan to make 9th Street safer this spring, and I'm grateful that they are good to their word. We remain deeply committed to Vision Zero, to that day when no New Yorkers are killed in traffic crashes. We must keep working every day to get there, through design changes like those coming to the 9th Street and 4th Avenue corridors, and also through smarter enforcement to get reckless drivers like Dorothy Bruns off our streets before they kill. We know we can't bring Abigail, Joshua, and Sophia back to their families, but by making our streets safer, confronting reckless driving, and preventing future deaths, we will do all we possibly can to make their memory into a blessing."

“We must stop allowing politics get in the way of pedestrian safety,” said Council Member Justin Brannan. “Speed cameras near schools are a proven way to calm traffic and save lives. Not only must Albany reauthorize current speed cameras, they must expand the current program.”

"Smarter street design and speed enforcement cameras have proven to be highly effective tools in keeping pedestrians safe without limiting their access to our streets," said Senator Leroy Comrie. "Throughout my career in public service both in the New York State Senate and the New York City Council,​ I have proudly supported legislation to expand speed enforcement cameras along critical corridors throughout New York City. I applaud the Mayor and Commissioner for their commitment to improving pedestrian safety, and I look forward to continuing to partner with them on needed street safety projects."

State Senator Jose Peralta said, "It is vital that we increase, once and for all, the number of speed safety cameras in school areas across the city. The time for excuses is over. There is plenty of evidence that shows that this program has been successful since pedestrian, cyclist and motorist-related crashes have been reduced by 15% where speed cameras are installed. My proposal to increase the number of speed cameras has only one goal: Protect schoolchildren and New Yorkers in general. We must act before the current school zone speed camera program expires this summer, so children will not be at risk when they return to school in September. I applaud the Mayor and DOT for their efforts to increase road and pedestrian safety across the city, and I urge my colleagues in the State Senate to pass my bill to increase the number of speed cameras."

"Having lost family to a car accident right by a school, the issue is all too real to me, and if speed cameras can help families avoid the pain and needless death then I absolutely support it,” said Senator James Sanders Jr.

Senator Jesse Hamilton said, “Honoring the memories of Abigail, Jacob, and all those killed or injured by crashes means taking action. I welcome the announcement today of important streetscape redesign proposals set to go before Community Board 6, action that will make for safer streets. I also call for the passage of critical legislation in Albany that holds drivers accountable for their actions behind the wheel, links public health professionals with the proper authorities to prevent medical emergencies from causing tragic deaths, and permits additional school-based speed safety cameras. Standing united, we must choose to make the changes that will save lives. Our New York communities deserve no less.”

"Deaths and injuries caused by speeding vehicles are one hundred percent preventable, and the city's speed camera program has done a commendable job of decreasing the risk of these tragic accidents in areas where large numbers of children walk and play," said Assembly Member Steven Cymbrowitz, a co-sponsor of the legislation to expand the speed camera program. "Installing the cameras in busy locations like this one will go a long way toward keeping everyone safe from harm.”

“There are no words, or actions that will take away the pain that is caused by traffic violence. My heart aches for the families and friends who have lost loved ones- including some on this very corner,” said Assembly Member Deborah J. Glick. “It is the Government’s job to do everything it can to protect our most vulnerable, and too often we fail. I thank the Mayor for his support of my bill, which would increase the number of speed cameras allowed in school zones throughout the city. If the Senate would pass this bill, and the Governor sign it, it would be one more tool to improve road safety not just at this intersection, but around the City, to ensure that no other families are forced to endure this pain in the future.”

“Traffic-calming measures like speed cameras and redesigned streetscapes at problem intersections are known to reduce fatalities and injuries for pedestrians, motorists, and passengers,” said Assembly Member Richard N. Gottfried. "I support an increase in the number of school-zone speed cameras and the area they cover. We cannot have too many.”

"We must commit to work together to redesign our city's unsafe streets so we can prevent future tragedies and protect our children," said Assembly Member Dan Quart. "Speed cameras are a proven, effective way to save lives and I'm proud to cosponsor legislation that will expand Vision Zero to more school zones and encourage safe driving."

“I welcome the effort to create expanded pedestrian access and protected bicycle lanes,” said Assembly Member Felix W. Ortiz. “Safety always come first. Speed zone cameras at schools will also help save lives and should be reauthorized by the legislature before we adjourn."

Assemblymember Jo Anne Simon said, "A redesign of 9th Street is absolutely crucial in making sure that another tragedy like the one that took the lives of two children earlier this year, does not occur again in our community. Driver behavior directly affects street safety, but their behavior is changed when streets are redesigned and when speed safety cameras are installed. The safety of our children and our community must be our highest priority. We have seen a dramatic reduction in injuries and speeding violations in school zones that have safety cameras, so delay is unacceptable. The Assembly voted to expand speed safety cameras in our one-house budget this year - it’s time for the Senate to step up. Thank you, Mayor de Blasio and NYC DOT for your commitment to making our streets safer for everyone.”

"We know what it takes to prevent people from being killed or seriously injured on our streets, so we welcome the City's plan to fix 9th Street and their strong support for expanding the speed safety camera program," said Paul Steely White, Executive Director of Transportation Alternatives. "The comprehensive redesign of 9th Street, along with more life-saving speed enforcement technology near schools, sends a message that our streets are for people first, and that drivers who don't abide by this will be held accountable."

“No family should have to endure tragedy because of the way streets are designed, but that has been the sad reality for too long. The redesign of this dangerous corridor, as well as an expanded speed safety camera authorization, can’t come a moment too soon. We thank the mayor and the Department of Transportation for making safety a priority on 9th Street,” said Amy Cohen, founding member of Families for Safe Streets.