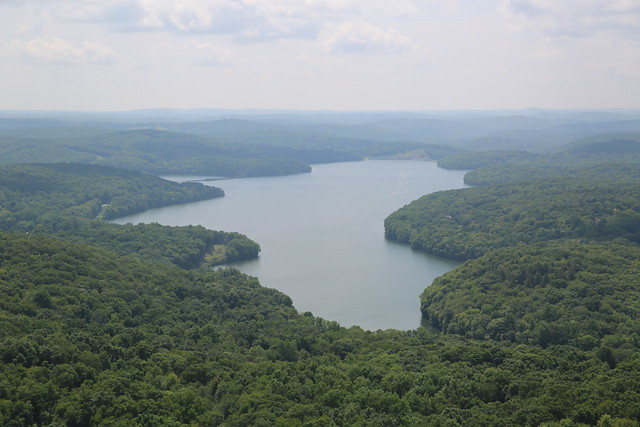 Located in Putnam County in the Towns of Carmel and Southeast, more than 30 miles north of New York City. Formed by the damming of the West and Middle Branches of the Croton River, which continue south and drain into the Muscoot Reservoir.

Consists of three basins, separated by the Route 35 and Route 36 causeways; water flows between basins through culverts under the roadways. Holds 14.2 billion gallons at full capacity. Placed into service in 1911.

Croton Falls is one of 12 reservoirs in the City’s Croton Water Supply System. Basin 1, the largest of the three, holds 70% of the reservoir’s total volume. It receives water from the West Branch of the Croton River. Basin 1 also receives input from a smaller tributary which brings water from Lake Gilead, one of three controlled lakes that are part of the Croton Water Supply System. Basin 2 holds 26% of the reservoir’s volume and receives water from the City’s Middle Branch Reservoir. Basin 3 receives most of its water from a single stream, Michaels Brook. Water leaves all three Croton Falls basins by way of the continuation of the West Branch of the Croton River, which joins the East Branch, flows into the Muscoot Reservoir, and then to the New Croton Reservoir. After moving through the New Croton Aqueduct, the water reaches the Jerome Park Reservoir in the Bronx, where it enters New York City’s distribution system. The Croton Falls Reservoir is also connected to the nearby Diverting Reservoir via a channel and dividing weir. Water usually passes freely between the two reservoirs.

The Croton Falls watershed’s drainage basin is 16 square miles and includes portions of the Towns of Carmel and Southeast.