On Tuesday, April 17, the Mayor's Office of Media and Entertainment (MOME) hosted the second annual 2018 MOME Finance Lab, an afternoon of collaboration and networking in support of film projects by, for or about women. The event provided over thirty women filmmakers with an unprecedented opportunity to pitch multiple financiers for investment in their projects, in 10 minute speed pitch sessions. The aim of the event is to cultivate films in New York City made by, for, and about women, and seeks to address the persistent gender gap in the filmed entertainment industry.

"Through the MOME Finance Lab, our agency plays the role of 'connector' between women filmmakers and the financial backers that can help bring their projects to life," said Media and Entertainment Commissioner Julie Menin. "We were so pleased to bring this program back for a second year, as we continue to initiate programs to support women in the entertainment workforce – whether they are new to the industry or seasoned professionals."

The keynote address for the MOME Finance Lab was delivered by Abigail Disney, Emmy-winning director and producer, philanthropist, and the CEO and President of Fork Films along with her partner, Adrienne Becker, CEO of Level Forward. Disney and Becker are passionate about advancing women's roles in the public sphere, and has spearheaded a variety of media and entertainment projects with a commitment to innovation, inclusion and impact.

MOME Finance Lab does not discriminate based on race or gender. All programs and activities of the MOME Finance Lab are open to all eligible applicants, without regard to race, gender, national origin or other characteristic protected by law. Read highlights from the 2016 MOME Financial Lab here. 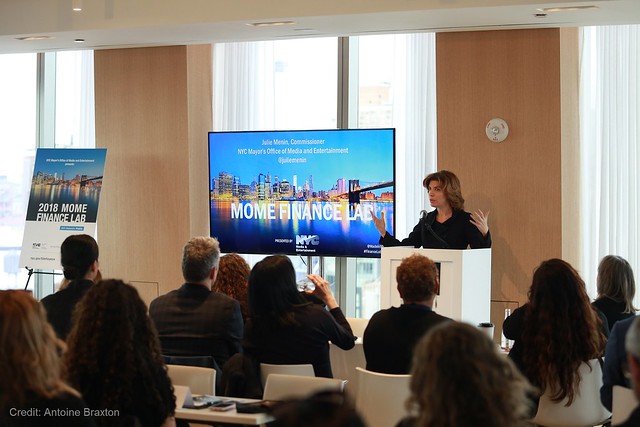