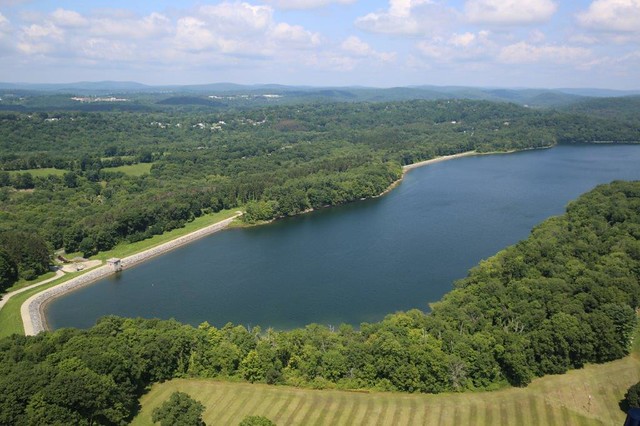 Located in Putnam County, in the Town of Southeast, approximately 38 miles from New York City. Formed by the damming of Bog Brook, a small tributary of the East Branch of the Croton River, which continues southwest to the Diverting Reservoir. Holds 4.4 billion gallons at full capacity; placed into service in 1892.

The Bog Brook is one of 12 reservoirs in the City’s Croton Water Supply System. It’s connected to the nearby East Branch Reservoir by an underground tunnel. With a very small watershed of its own, Bog Brook’s main function is to serve as a storage reservoir for the larger East Branch Reservoir. The water eventually makes its way into the New Croton Reservoir in Westchester for further settling. It leaves that reservoir in the New Croton Aqueduct, which carries the water to the Jerome Park Reservoir in the Bronx, where it enters New York City’s water supply distribution system.

Bog Brook’s watershed drainage basin is 4 square miles, all within the Town of Southeast.