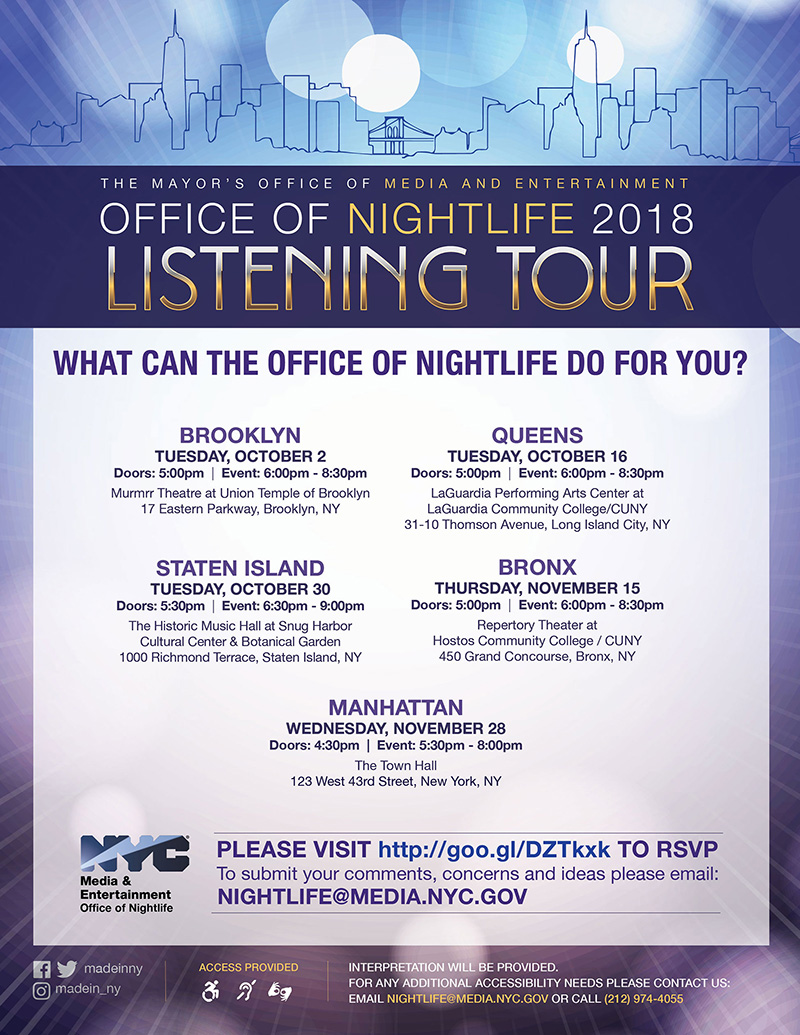 The Office of Nightlife will be inviting comments, concerns, and ideas from nightlife business owners, residents, patrons, employees, and artists to strengthen safe and vibrant nightlife in New York and address any concerns.

NEW YORK – The Office of Nightlife, at the Mayor's Office of Media and Entertainment, today announced a five-borough listening tour to hear comments, concerns, and ideas for strengthening New York's distinctive nightlife. Established earlier this year, the Office of Nightlife serves as a central point of contact between City agencies, nightlife business owners, employees, patrons, and city residents, promoting a safe and vibrant nightlife scene beneficial to businesses and communities across the five boroughs.

The sessions are designed to inform the Office of Nightlife as it pursues policy recommendations and long-term solutions to ensure the vitality of New York's nightlife. Attendees will be invited to publicly share their ideas and priorities for every borough and every neighborhood. The Office of Nightlife welcomes all New Yorkers to share feedback on topics such as quality of life, safety, regulations, enforcement, and the role nightlife plays in fostering creativity and social cohesion.

New Yorkers can also reach the Office of Nightlife to share their ideas and priorities at nightlife@media.nyc.gov.

The listening sessions will be led by Ariel Palitz, the Senior Executive Director of the newly established Office of Nightlife. The Office of Nightlife cements New York's position as a global leader in a growing movement of more than 30 major cities around the world working to balance vibrancy and safety by proactively managing life at night. Similar efforts in cities such as Amsterdam, London, Paris, and Berlin have yielded social benefits such as reductions in noise complaints, and healthier, more productive nighttime economies.

Nightlife is vital to New York's economy as well as its identity. New York's nightlife has long been an important incubator of cultural movements, fueling the development of jazz, salsa, punk rock, disco, and hip hop, and continuing to provide spaces for creativity and social cohesion. At the same time, nightlife has increasingly become a major driver of New York's economy, supporting hundreds of thousands of jobs and tens of billions of dollars in economic activity.

"We are very excited to present this listening tour, which will give New Yorkers from each borough a chance to share their thoughts on nightlife," said Media and Entertainment Commissioner Julie Menin. "Beyond listening, we are committed to helping nightlife businesses run safe and successful establishments, while safe-guarding the quality of life of the surrounding communities."

"New York nightlife is a large part of who we are, and a big part of why people want to live, visit, and play here," said Office of Nightlife Senior Executive Director Ariel Palitz. "Nightlife is about being social, coming together, making a living, and celebrating life. But it also comes with real challenges. These listening sessions are the perfect opportunity to hear from all New Yorkers, both inside and outside of the industry to ensure that nightlife and New York works for everyone, 24/7."

Elected officials and representatives from City agencies with oversight of nightlife will also be on hand to note constituent concerns and to follow up where appropriate.

The meetings will be held in theaters and performance spaces with a mission-driven or community-oriented purpose, including Staten Island's historic Music Hall at Snug Harbor Cultural Center & Botanical Gardens, the second oldest concert hall in New York City after Carnegie Hall, and The Town Hall in Manhattan, built in 1921 as a public meeting space for women's suffragists by the League for Political Education.

The Mayor's Office of Media and Entertainment thanks its partners at these two institutions as well as the hosts at the other three meeting sites: Murmrr Theatre at Union Temple of Brooklyn, a historic 1929 theater, community center that hosts music, readings, comedy, live podcasts, and talks; LaGuardia Performing Arts Center at LaGuardia Community College/CUNY in Queens, with a long and respected history of engaging, presenting, and producing new artistic work by diverse, international artists; and Repertory Theater at Hostos Community College/CUNY, celebrating 50 years of being an educational agent for change, transforming and improving quality of life in the South Bronx and neighboring communities since 1968.

"Ranging from smaller DIY venues to more established clubs, the nightlife industry in New York City has never been more vibrant and diverse," said Council Member Rafael Espinal. "Yet the industry still faces many challenges, which is why I fought to establish the Office of Nightlife and why I continue to advocate tirelessly for venues that are struggling. It is my hope that through this listening tour, we can hear from a wide array of voices on how to improve the nightlife experience for everyone. I encourage residents from every borough to attend these meetings, so they can be as inclusive and productive as possible."

Brooklyn Borough President Eric L. Adams said, "I welcome the Office of Nightlife to Brooklyn as they kick off a five-borough listening tour. The energy goes up when the sun goes down in our borough, and our creative culture shines bright. Our nightlife industry is an attraction for locals and visitors alike, bringing diverse groups of people together and generating quality jobs that employ so many of our neighbors. We must also ensure that our businesses are good neighbors in kind, which is why I encourage my fellow Brooklynites to come out and share feedback on what works and what could work better, as we seek to foster a safer and more vibrant nightlife environment for all."

"In the city that never sleeps, nightlife is woven into the fabric of our culture and our economy – but it's not without its challenges," said Manhattan Borough President Gale A. Brewer. "The new Office of Nightlife can play a crucial, constructive role troubleshooting problems and helping establishments and the neighborhoods around them coexist in harmony. Hearing from Manhattan residents and stakeholders in a public setting is vital to building the office's to-do list."

"This upcoming nightlife tour is a great first step to introduce Ms. Palitz and the newly created Office of Nightlife to Bronx businesses and other stakeholders. I encourage all interested parties to take part in this tour, and I look forward to a robust discussion on the issues and concerns surrounding nightlife in our borough and our city," said Bronx Borough President Ruben Diaz Jr.

"The Office of Nightlife's listening tour will be an excellent opportunity for all stakeholders to play a constructive role in the future of New York City's nightlife. By sharing your ideas and experiences, it will allow the City, and our newly convened Nightlife Advisory Board to incorporate your ideas and perspectives into fostering a nightlife that's vibrant, diverse, equitable and responsive to all," said Andrew Rigie and Olympia Kazi, Chair and Vice Chair of the Nightlife Advisory Board. The Nightlife Advisory Board is an independent, all-volunteer, 14-member body charged with making recommendations to the Mayor and City Council on ways to improve regulations and policies that impact nightlife. Its members range from DJs and hospitality advocates to regulatory attorneys and community advocates, bringing a variety of perspectives and expertise on New York City's celebrated nightlife.