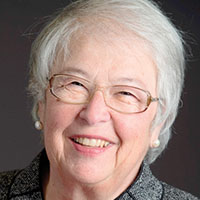 Carmen Fariña is Chancellor of the New York City Department of Education, the largest school system in the nation. She is responsible for educating 1.1 million students in more than 1,800 schools. During her more than five-decade career in education, Fariña has distinguished herself as a dedicated and innovative teacher, principal, district superintendent, and deputy chancellor.

As Chancellor, a role she assumed in January 2014, she has delivered free, full-day, high-quality pre-kindergarten to more than 150,000 four-year-olds. To build on this strong, early foundation, she is working to ensure that all students are reading on grade level by the end of second grade. Other priorities include a renewed focus on parent engagement and professional development for educators. She also has expanded the community schools model, providing more mental health and other services to students and families. In fall 2015, Chancellor Fariña and Mayor Bill de Blasio announced Equity and Excellence for All, a set of new initiatives aimed at putting all students on the path to college and meaningful careers.

A daughter of Spanish immigrants, Fariña was the first person in her family to graduate from college. She holds a Bachelor of Science from New York University and master’s degrees from Brooklyn College, Fordham University, and Pace University. She is co-author of A School Leader’s Guide to Excellence: Collaborating Our Way to Better Schools (Heinemann, 2008). Fariña’s honors include the Sloan Public Service Award (1989), presented annually to exemplary civil servants. In 2015, Crain’s New York Business selected Fariña as one of the 50 most powerful women in New York City and People en Español named her one of its 25 most powerful women. Also in 2015, Manhattanville College awarded her an honorary Doctor of Humane Letters degree. The mother of two adult daughters and proud grandmother of three young boys, Fariña lives in Brooklyn with her husband of more than 50 years.
.